HÉRCULES - A SAGA - Hercules and the Circle of Fire

HÉRCULES - A SAGA - Hercules and the Circle of Fire 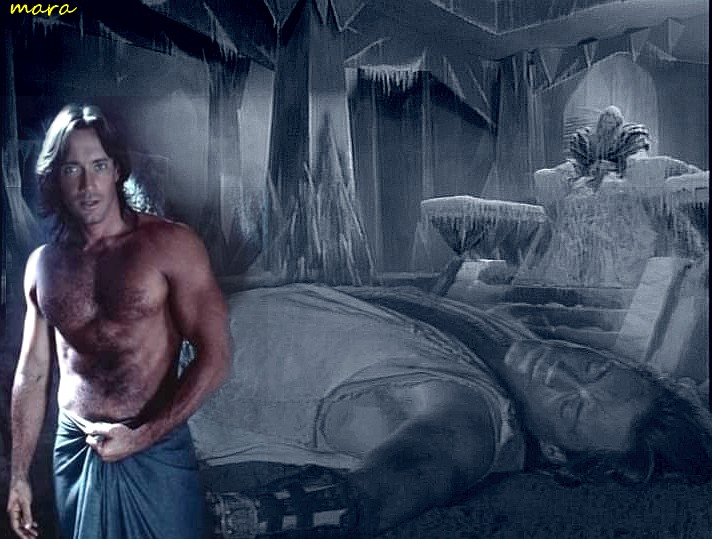 Hercules and the Circle of Fire 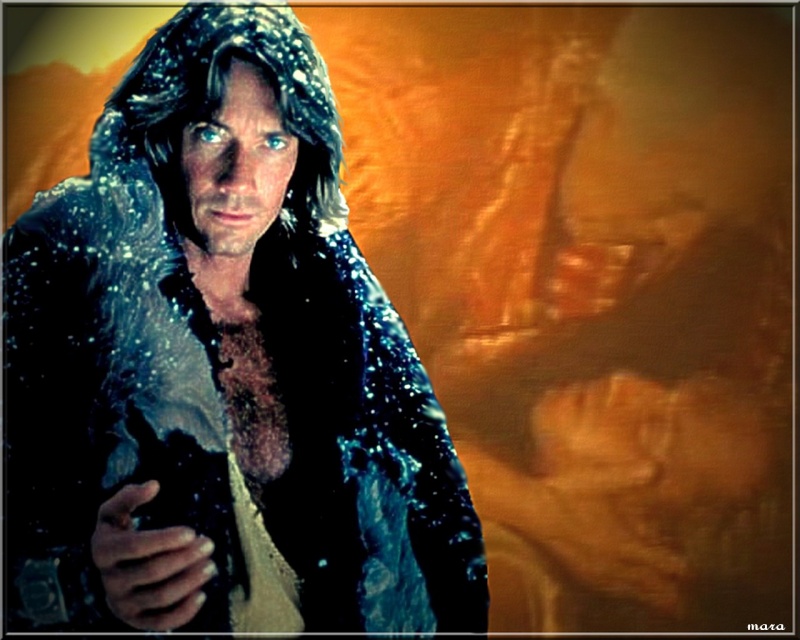 ENGLISH VERSION:
Hercules and the Circle of Fire

Hercules has a dream in which he is traveling through a snow storm. During the dream, he meets a beautiful woman sheltering herself under a fur coat. The demigod attempts to seek refuge in Zeus' cavern, welcomed with open arms by his father. But a large rock covers the entrance before he can enter. Hercules then watches as the woman bursts into many pieces. The next morning, a young man called Janus comes for Hercules' help. He needs him to defeat a warlock who's stealing young women from his village so he can suck their youth from them to remain young. It turns out that Janus really is the warlock -- he wants Hercules' strength. After a battle against the warlock, Hercules stabs his heart, beating inside a jar, which kills him. The warlock's prisoner, a pretty girl from the local village, is rescued. Before leaving, Hercules fills a vile with water from a fountain in the cavern, which ends up being booby trapped, collapsing the cave. Hercules and the girl barely make it out alive. Zeus helps pull them up to the surface. Hercules bids farewell to the girl. Zeus peaks down into the collapsed cave to see if any more attractive girls need to be rescued.

Hercules and his father sit down and decide to talk for awhile. Zeus wants Hercules and him to spend more time together. Hercules likes the sound of that, however, since he has to get the vile of water to his friend, Cheiron, he can't spend any more time with his father right now. Later on, Hercules arrives at Cherions treehouse. Cheiron was cocky and arrogant in his youth, somehow finding a way to become immortal. He has a painful wound on the side of his stomach that was given to him by someone else with immortal blood in them. A wound inflicted by someone with immortal blood on an immortal never heals on its own. Having vowed to find a cure if one exists, Hercules hopes the water from the warlocks fountain will do the trick. It doesnt. Cheiron tells Hercules to give up. The demigod wont, remaining intent on someday finding it, knowing how much Cheiron yearns to live out a mortal life with his wife and children. That night, all the fires in the local town disappear. Hercules sees that the villagers have gathered outside Hera's temple, begging the priests inside to let them have some of the temples fire. Heras servants refuse, claiming the fire inside the temple belongs only to Hera. Hercules notices that the woman leading the villagers is the same woman he saw in his dream the other night.

Hercules tries to use force to get the priests to open up the temple doors. Force doesnt impress his dream woman, who wants to talk her way into the temple. Once inside, thanks to force, Hercules beats up the temple guardians in an epic encounter. After the fight, he manages to gets a lit torch for the villagers. Suddenly, three of Hera's priestesses appear, proclaiming Hera is so sick of mortals that she is removing fire from Earth forever so everyone and everything will freeze to death. The woman goes to see Cheiron, who knows about the gods and can help her find Prometheus, the Titan who can restore fire. Cheiron tells her that he is too weak to assist her. He suggests she ask Hercules. The woman, called Dieaneria, is shocked to learn Hercules is the man who tried to assist her earlier. The two head out to pay a visit to Prometheus, the last Titan who gave mortals the gift of fire so they could learn, live and prosper for all time. Dieaneria and Hercules don't agree on anything as they talk about a matter of things on their way. They finally reach the House of Prometheus after climbing up a steep cliff. The inside of the Titan's home is iced completely, instead of being the usual inferno. Unable to break free from the ice, Prometheus tells Hercules that he must find the Eternal Torch, which Hera has taken to Mount Ethion. The son of Zeus agrees to this task.

In a nearby village, the townsfolk are trying to make sacrifices to the gods in hopes that they will spare them from the cold. When he passes through with his traveling companion, Hercules tells the people not to worry about the gods and to keep the food they are sacrificing for themselves. The people tell him to leave them alone. Meanwhile, Dieaneria is giving two starving kids some bread from her pouch when Zeus shows up, presenting her with a flower he calls a "Dieaneria Blossom." Hercules pulls his father aside when he sees him flirting with his traveling companion. Zeus tells his son that he doesnt want him to look for the Eternal Torch. Although Zeus tells Hercules that he cares about people, he makes strict note that this time his son better not defy him. Before Hercules can ask his father his reasons, Zeus leaves.

Hercules, walking with Dieaneria down a forest path as they continue on, tells his traveling companion that Zeus could bring back fire but won't because of Hera. Soon after, the two run into a bundle of trouble in the form of a young girl named Phaedra. After some back and forth banter, Phaedra tells the two to take a shortcut through the forest. Night arrives and so does some more trouble. Anteyus, a creature made of the forest itself, attacks Hercules and Dieaneria. Dieaneria assists Hercules in defeating the monster by reminding the demigod that the soil, which is Anteyus' mother, supplies him with his life. In other words, he cant let the monster touch the ground. Instead of breaking him into pieces to reform on the ground, Hercules shakes the creature apart and hangs its corpse on a wooden pole. Hercules thinks Phaedra is working for Hera since she led them down this deadly path. Moments later, a storm forces Hercules and Dieaneria to seek shelter under a nearby cove. While talking to each other, Dieaneria learns Hercules wounded Cheiron, which is why he is so determined to find the cure to his eternal suffering. She also learns that Hercules feels abandoned by Zeus, who is standing and watching their conversation from behind some nearby trees. Having gained a new respect for each another, Hercules and Dieaneria decide to become friends.

Hercules and Dieaneria confront Phaedra the next morning when their paths cross a second time. She apologizes for setting them up, though she claims it was a mistake. She then gives them new directions. They go in the opposite direction. It turns out she has tricked them again, knowing they wouldnt listen to what she said. This time the problem they face is a collapsing bridge. After some quick thinking, the two make it safely across. They can now see the peak of Mount Ethion in the distance. That night, the two seek shelter at a local inn that still has a fire. Phaedra tells three women, who are the daughters of the greedy Thespius of Athens, that Hercules is at the inn. Wanting an audience with the son of Zeus, the women enter Hercules room while he sleeps. Thinking about his beautiful new friend the whole time, Hercules actually thinks the first woman is Dieaneria! Meanwhile, Phaedra places a flower outside Dieaneria's room. She thinks Hercules left it for her. Moments later, she enters Hercules room, only to find him with the three women. Hercules tries to explain everything to her. Feeling duped, Dieaneria runs off, heading toward Mount Ethion to get the Eternal Torch herself. As she passes through another forest, Dieaneria overhears the three women from the inn, who are now traveling to another inn with their father, wondering why Hercules called them each Dieaneria. Dieaneria feels foolish now as she realizes Hercules was duped. Once she makes her way nearer to the Eternal Torch, Dieaneria passes out from the intense cold. Hercules chases Phaedra to a cavern in the mountains in which Zeus is relaxing in front of a fire. He finds out it was Zeus who convinced Phaedra to stop him from reaching the Eternal Torch. Zeus does not want his son to risk being touched by the flames surrounding the Eternal Torch, knowing they can kill any sort of immortality. Despite trusting that his father truly cares for his well-being, Hercules has to try for the sake of the world.

After removing a rock that his father uses to block his way out, Hercules finds Dieaneria laying in the freezing cold. He comforts her as the two make a quick amends. They then make their way to the entrance of the cavern in which the Eternal Torch is being kept in a circle of fire. Father and son have a showdown outside the entrance after Zeus threatens to hold back his son with force if he doesnt go back to the cave. Hercules survives each of Zeus' thunderbolts and blasts. Finally, Zeus threatens to actually kill Hercules if he attempts once more. After telling his father that he cares about people and will take that risk, Zeus breaks down telling Hercules that he cares about people, but cares more about him. Hercules tells Zeus that while he does love him he still has to do this. Zeus finally allows Hercules to pass. Dieaneria and Zeus watch as Hercules then leaps over the deadly flames. As he lands in the circle of fire, he musters all his strength together. He manages to free the Eternal Torch after a brief struggle. The demigod tosses it into the night sky. It lands safely in the House of Prometheus, which once again becomes an inferno. Mortals have regained the gift of fire. Sadly, things arent too great for Hercules, who has passed out from the heat of the flames. Zeus tells Hera that if she kills his son she will have to kill him too. Getting no response from her, Zeus starts towards the flames. Hera, not wanting to give her husband a noble death, removes the flames away as Zeus prepares to walk into them. When he comes to it, Hercules asks Zeus what he would have done had Hera not given in. He says the two of them would be in a lot of trouble. After picking up a small flame that is left with a stick, Hercules takes it back to Cheiron. Since the fire kills any sort of immortality, Cheiron is finally cured. Cheiron goes over to celebrate his mortality with his wife and kids. Hercules and Dieaneria share a passionate kiss.

HERCULES AND THE CIRCLE OF FIRE